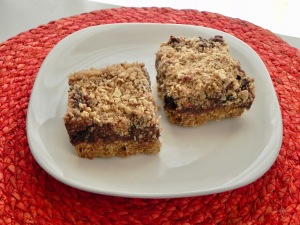 Have you ever looked at your baking supplies and wondered what to do with 1/2 cup of this flour, or a little of that flour? I was confronting that dilemma when I found a recipe for oatmeal bars. With all of the rolled oats and other textures, no one would notice that I had a flour mixture added in. I also decided that they would be tasty for breakfast, snack, or dessert, so they were winners.

To adapt to high altitude and dryness, I reduced the baking soda and added non-dairy milk to the recipe. To make them vegan, the easy swap was using oil in place of butter. The original recipe had packaged caramels as an ingredient which are generally not vegan, so I left them out and used jam instead. My final change was to make more of a crust layer underneath, thus creating a sturdier and less sweet bar.

Oatmeal Jammies adapted from Oatmeal Carmelitas
3 cups flour, mixed (I used a mixture of all purpose, whole wheat, and pastry flour)
3 cups quick cooking rolled oats
2-1/4 cups brown sugar, firmly packed
1 heaping tsp baking soda
scant 1/2 tsp salt
1-1/8 cups canola oil
1-1/2 tsp non-dairy milk
1 cup seedless blackberry jam, gently melted
1 cup vegan mini chocolate chips
Preheat oven to 350F. Grease the bottom and sides of a 13″ x 9″ pan. In a bowl, add flours, oats, brown sugar, baking soda, and salt and whisk to combine. Add oil and milk and stir until crumbly. Reserve half of the crumb mixture for topping. Press remaining crumb mixture in the bottom of the prepared pan. Spoon jam to the edges of the crust in the pan and sprinkle chocolate chips over the jam. Sprinkle with reserved crumb mixture evenly to coat.
Bake for 20 to 25 minutes or until light golden brown and bubbling around the edges. Cool for 1 to 2 hours on a wire rack or until completely cooled. Cut into bars, then store covered with foil at room temperature.

Until next time, happy baking! 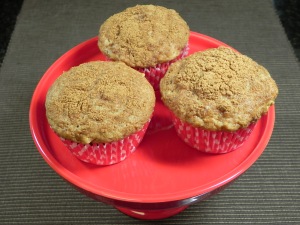 Upon looking over at the apples in my fruit bowl, I realized they weren’t getting eaten fast enough. I needed to bake them into something quick so I decided to make Apple Cinnamon Brunch Muffins. That, and I had just bought Alisa Fleming’s book “Eat Dairy Free” and wanted to make a treat from it.

The recipe was already already vegan and had high altitude suggestions, so I didn’t need to come up with substitutions for that. But, when I pulled out the ingredients from my pantry I realized that I didn’t have enough light brown sugar. To remedy that I used a combination of light brown sugar, dark brown sugar (which had too strong a taste to use on it’s own), and organic granulated sugar. The mix worked out great, and made muffins that were delicious with vegan sausage and tea.

Until next time, happy baking! 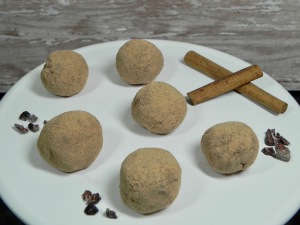 It seems I have been slaving over cookie cutters far too much lately, so I went easy on myself with this week’s recipe. Making chocolates is not very difficult and can be quite fulfilling. You can grab whatever is in your pantry to make them savory, healthy, and any taste you choose (I added cinnamon). I also discovered a new recipe twist I had to try – it added probiotics to the mixture for a health-giving extra. Now you can have your sweets and supplements at the same time.

This recipe has no tips for high altitude baking, but I can offer a few insights. In the past I had used Cocoa Butter for making body products. It was from a crafts website and I thought it smelled pretty good because it had cocoa undertones. And then I opened a package of Navitas Naturals Organic Cacao Butter. It was heaven. I wanted to eat the nuggets straight from the bag. They are luscious, but be aware that when the melted butter cools it gets almost as hard and messy as candle wax. Another Navitas Naturals product I tried was Maca Powder. It is dubbed an “Incan Superfood” and it has a caramel-like taste. I chose to roll my bonbons in a mixture of Cacao Powder and Maca Powder for extra nutrients and the caramel overtones. Note: I’m not paid to like Navitas’ products, I just do.

Until next time, happy non-baking!